Federation of Seed Industry of India

Federation of Seed Industry of India 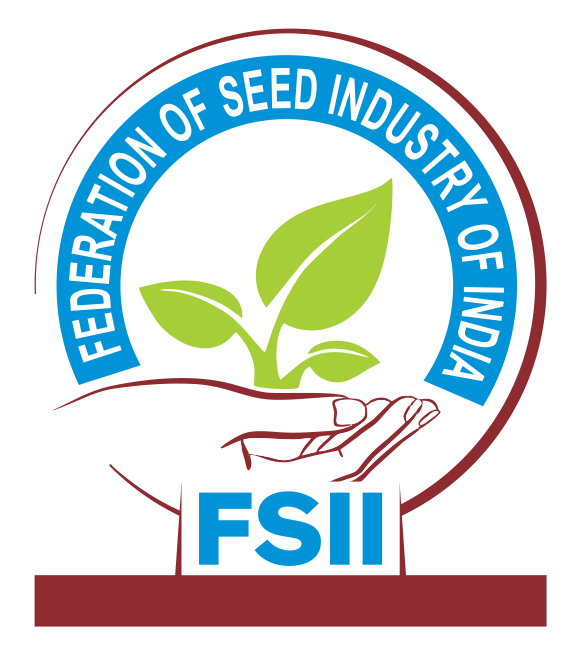 The above information is based on a presentation given during APSA's annual National Seed Associations meeting, held on 27 November, 2019. For the latest information about FSII, visit their website directly.

A webinar on “Research Priorities for Indian Seed Sector” was jointly hosted by Federation of Seed Industry of India (FSII), Delhi and Gubba Cold Storage, Hyderabad on 23rd Jan, 2021. The programme consisted of a panel discussion in which some of the best brains from the seed sector and research fraternity participated. The discussion was moderated by Ram Kaundinya, Director General of FSII. The focus of the discussion was on the possible scenarios of seed research in this new decade.

Opening the panel discussion, Dr DK Yadava, ADG (Seeds) of ICAR explained in details the stupendous work being carried out by ICAR in crop improvement encompassing a wide range of crops. Looking at the future of seed research he identified certain priority areas.  Breeding for biofortified crops,  climate resilience, environmental friendliness, improvement in grain quality of hybrid rice, oilseed development and yield improvement (crops like sunflower, mustard and sesame) and hybrid development in pigeon pea was specially marked by him for attention. He was of the view that all technological tools like GM, Gene editing, Marker Assisted Selection and other technology platforms must be exploited by the scientists to meet the challenges of this decade and beyond. He specifically pointed out the opportunity to apply GM technology in Soybean and other oilseed crops to improve yields and the possibility of support from different quarters for such a move. He called upon the private sector to enhance their research investments especially in OP crops like pulses.

Dr Ramasami, the Chairman of Rasi Seeds and also the Chairman of FSII, urged the seed industry to increase research investments. He pointed out that abiotic and biotic stress resistance should get the maximum attention, especially in crops like Paddy (gall midge, submergence tolerance,  plant architecture to increase the number of plants per acre, synchronized tillering, earliness, fertilizer use efficiency, Water Use Efficiency, varieties suitable for mechanical operations, etc),  cotton (sucking pests and CLCV, HDPS needs of earliness, dwarf size and suitable for mechanical picking) and others. He particularly highlighted the need to focus on pre breeding efforts with an idea of building research capacity beyond this decade. We should exploit the new tool like Gene editing to develop new varieties.  He also said that seed industry should partner with food industry through contracts for customized breeding programmes which develop varieties specifically suited to their needs.

Dr Paresh Varma, the Research Director of Shriram Bioseed stressed upon the need to develop technologies and varieties to handle abiotic stresses (apart from drought and floods, he mentioned nutrient stress in soil), biotic stresses (specifically disease resistance in crops), traits to mitigate labour costs (like Herbicide Tolerance), increased mechanization in crops like Corn, Rice and Cotton, to optimize agronomy and growth in cotton, corn and rice, traits for improving the quality and scale of seed production and traits required by downstream end users (like nutrition and health in food crops, lint quality in cotton and traits for industrial applications). He particularly mentioned the need to build PPP projects on some of the above and in pre-breeding projects.  Especially in oilseeds and pulses while the public systems have built enormous genetic base over the years the technology platforms set up by the private industry may be utilized to develop new varieties by the public institutions through PPP projects.

Shri Uday Singh, Chairman of Namdhari Seeds spoke about the Vegetables sector. He emphasized on the need to breed for yield, adoptability and disease resistance. He brought home the point that neglected crops like Indian greens ( Coriander, Palak and Methi) needed special attention for improvement of shelf life and to improve tolerance to high temperatures. He also mentioned the need to develop shape, size and resistance to Alternaria in Onions which could help in growing the crop throughout the year and bring greater price stability. As pathogens are evolving it is necessary to breed for resistance to CMV, CLCV, Anthracnose in Chilli and Gummy Stem blight, DM and PM in Cucurbits. He urged for research collaborations between Public and Private institutions and also among private companies. He recommended pathogen profiling to be taken up in each location. Shri Uday Singh mentioned the urgent need to strengthen the implementation of PPV&FR Act in order to increase research investments, especially in OPs of Indian crops.

Dr Suren Tiku, founder director of Tierra Seedscience listed some of the priority areas. We should use more of wild relatives to bring desired characters that are not available in the current germplasm.He mentioned WUE, NUE and Herbicide Tolerance as some of the targets. He laid emphasis on value addition breeding. He urged for widening our work on Indigenous vegetables. He advocated setting up of High throughput Service Centres for molecular breeding which will be very useful for medium sized and small sized seed companies. To avoid duplication of work he advocated allocating different virus strains to different organizations for research and PPP projects. 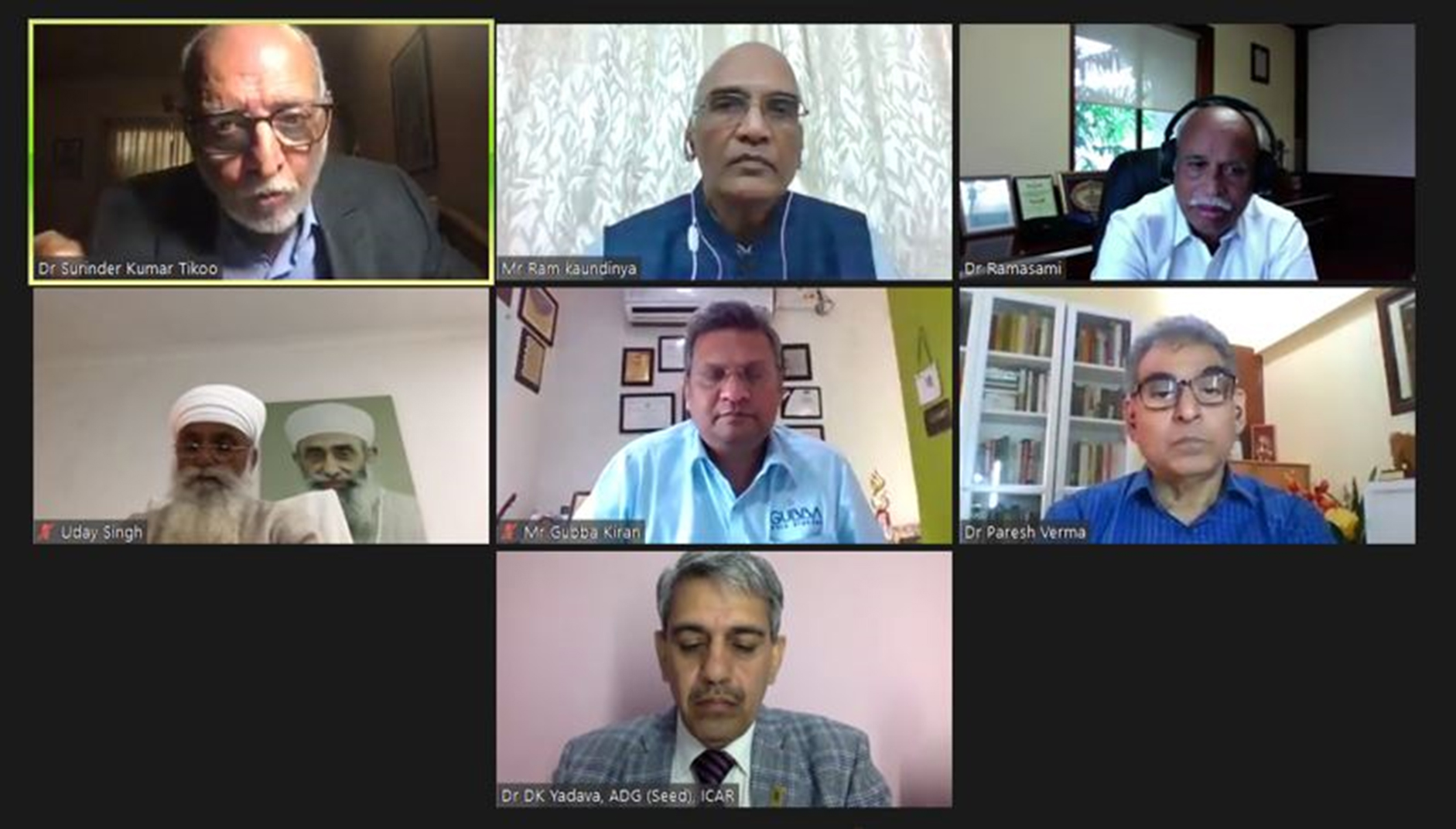 Alliance for Agri Innovation (AAI), Federation of Seed Industry of India (FSII) and University of Agricultural Sciences, Bangalore jointly organised a virtual International Conference on the topic ‘Current Scenario & Path forward for GM crops in India’ on 28th January, 2021. It saw discussions on new technologies that can address the problems of food insecurity, climate change while reducing expenses on crop inputs. The many hurdles in allowing the commercial release of genetically modified (GM) crops was also discussed. The speakers and audiences during the discussion pointed out that scientific data-based scrutiny of the GM technology is required and there is a need for public awareness to clear speculations about the technology. More than 500 participants who joined the conference included scientists, researchers, biosafety regulators, government officials, students, academicians and general public.

Dr S Rajendra Prasad, Vice Chancellor, University of Agricultural Sciences (UAS), the chief guest of the event, reminded the audience of how Bt cotton had benefitted India and the world tremendously and there had not been a single proven evidence of ill- effects of biotech crops in human or animal health. WHO, FAO, OECD have also reiterated the biosafety of GM crops across the globe with examples in several crops. India needs to emulate the success of Bt Cotton in other critical crops like soyabean, groundnut and mustard where yields are stagnant now. He said that hybrid technology and GM crops were chosen by experts to bring the next green revolution.

Mr Ram Kaundinya, Director General, Federation of Seed Industry of India (FSII) brought forward the deadlock in GM approvals in India, as there has not been a fresh approval to GM crops since 2005. In his opinion, the current regulatory stalemate had resulted post 2010 moratorium on Bt brinjal followed by the hold on GM mustard since 2017. Though questions have been raised about safety, regulatory process, seed sovereignty associated with GM cultivation, farmers have been positive as is evident from their demand for Bt Brinjal, HT Cotton and other technologies, which will be very critical for their success and competitiveness in the international market.

Dr C S Prakash, Dean and Professor (Plant Genetics, Genomics and Biotechnology), Tuskegee University, mentioned that humans have been modifying crops for thousands of years, ever since hunters-gatherers started cultivating, selecting plants to start agriculture. The wild ancestors of crops like maize, tomato and many other crops have been selected and modified over several thousand years and transformed into the incredible high yielding crops that we see today. India’s reluctance in approving Bt Brinjal has benefited Bangladesh, as it approved, planted and is reaping benefits of Bt Brinjal. Instead, Indian farmers lost a technological advantage, it also impacted scientific talent, research investments and pipeline in the country.

Dr Vibha Ahuja, Chief General Manager, Biotech Consortium, said that there was a need for reasonable science-based risk assessment of GM crops since they have novel or modified characteristics. The focus of risk assessment should be probabilistic but not speculative ones. There should be discussion on risks that can be evaluated by empirical means rather than based on unsubstantiated possibilities. If there are uncertainties around assessments or inadequate data, it can be resolved through further studies, however, it was very discouraging scenario for all concerned when decisions are delayed.

Dr Wayne Parrott, Program Director, Institute of Plant Breeding, Genetics & Genomics, University of Georgia, spoke about Gene editing technology and its potential in agriculture. Regarding the regulations associated with Gene edited crops, he mentioned that the world was in the state of a flux and most nations were in the process of defining and finetuning regulations and different countries were using different trigger points to decide if something was to be regulated. In his opinion both GMOs and genome editing were necessary for agricultural improvement.

Expressing concerns over activism against GM technology, Dr S R Rao, former advisor to Department of Biotechnology, Government of India said that regulations that started in 1975 have been updated and developed in keeping with technology development. It was agreed that regulators and scientists should actively create awareness regarding the technology and press for a science basedscience-based evaluation and approval of GM crops.

A recommendation is in the stages of development where excerpts and way forward for these technologies will be submitted to The Government of India to demonstrate the exasperation of farmers and urgency of the scientist and industry in bringing these technologies. Adoption of these technologies in right time is crucial to accrue the benefits. 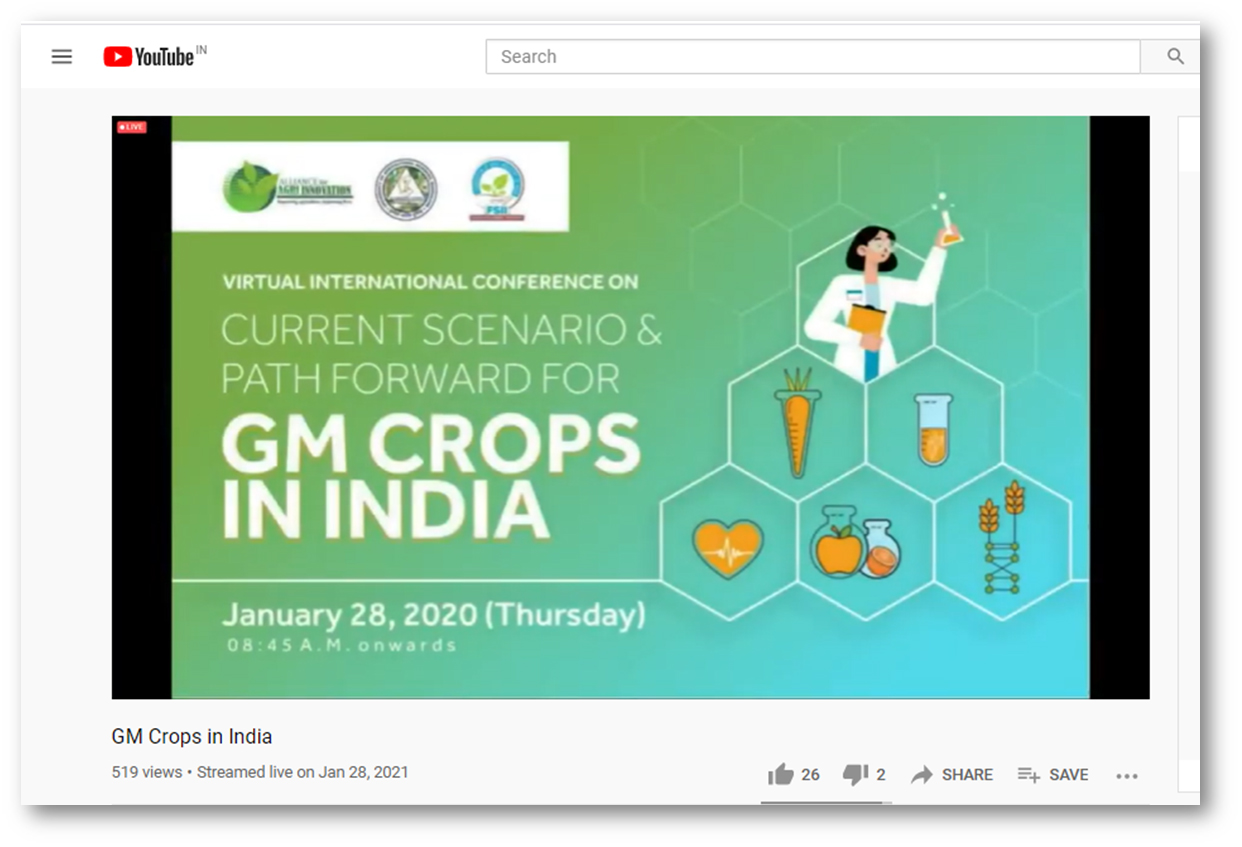