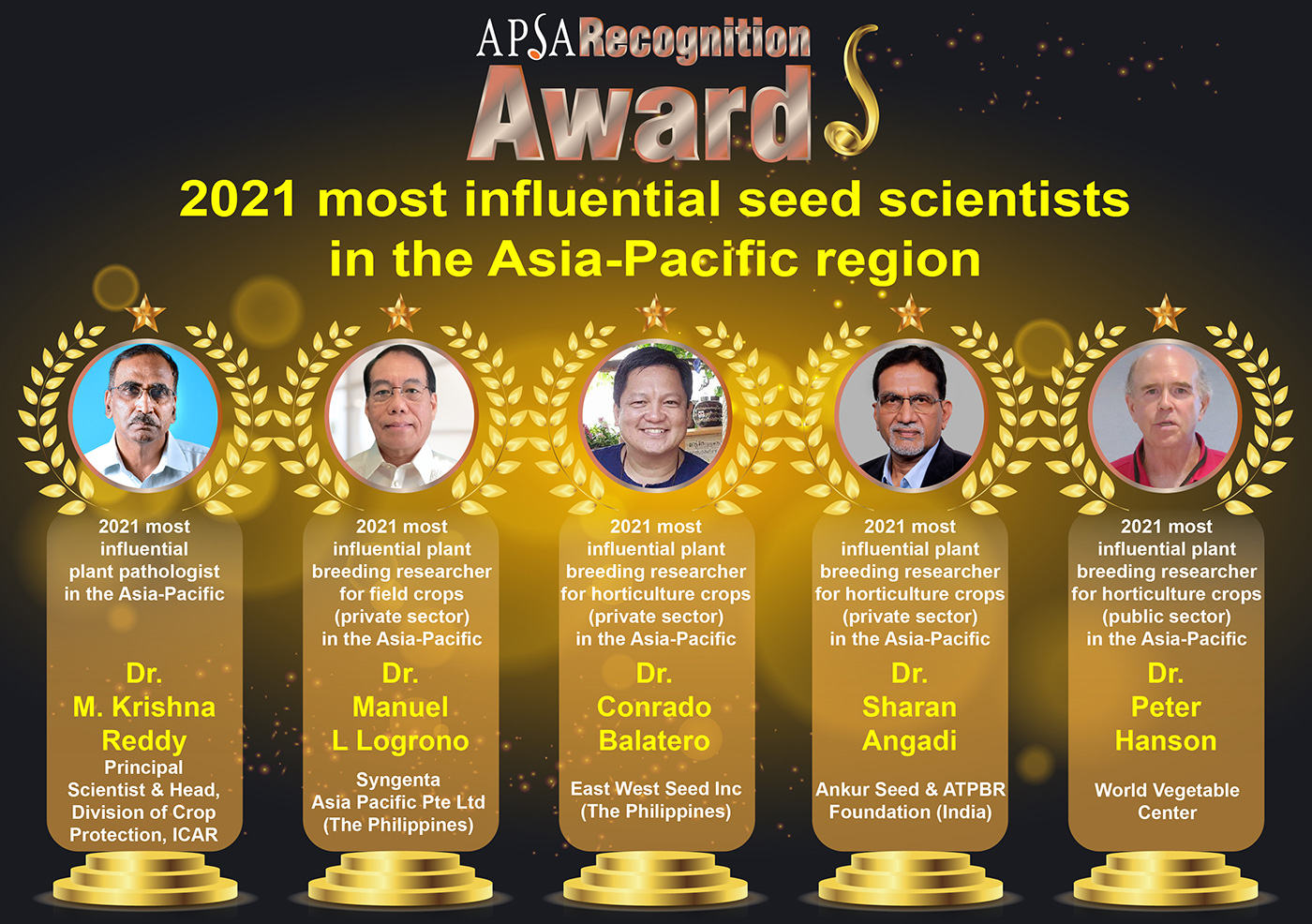 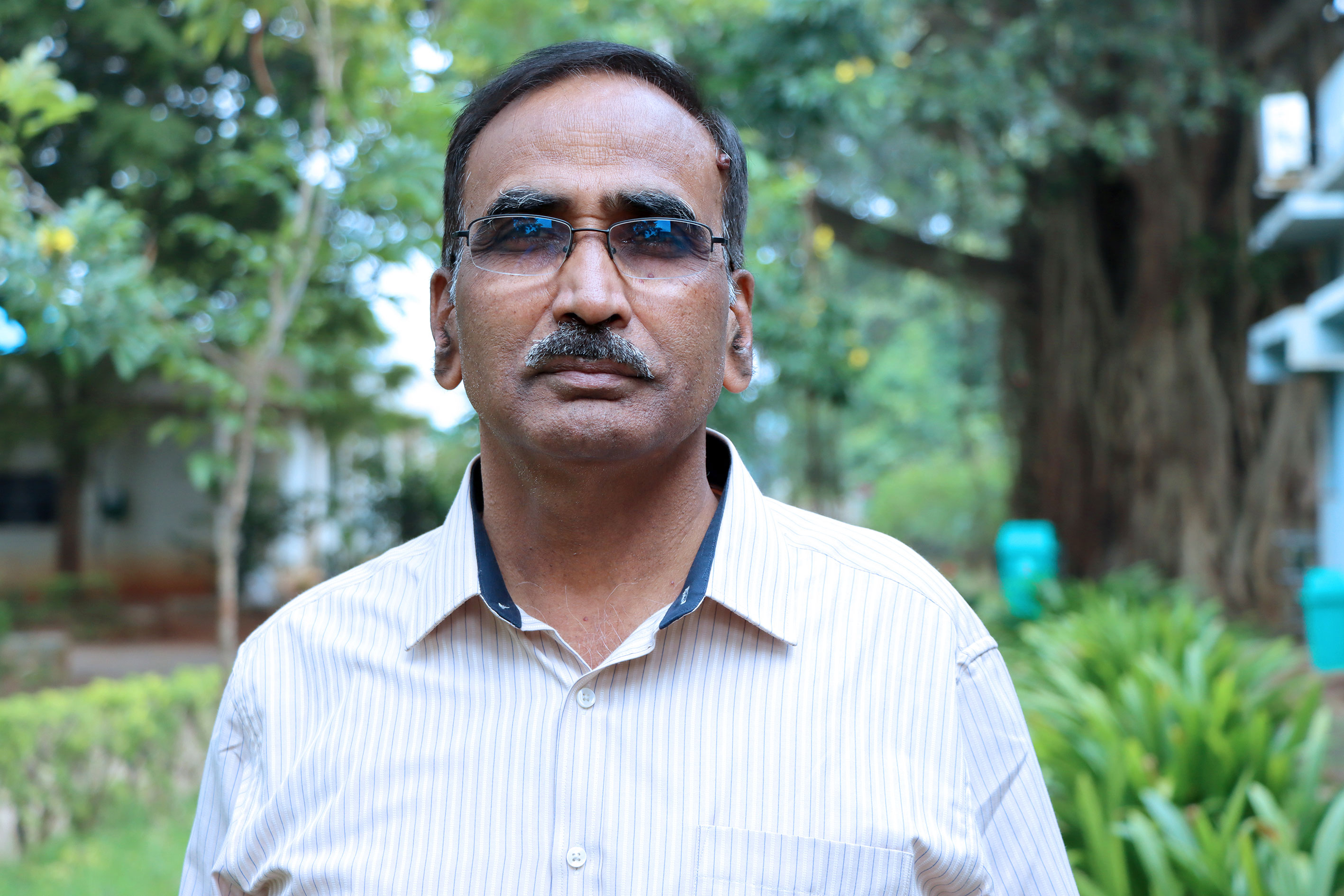 This award was initiated and overseen by the SC ITQ as a follow-up initiative to celebrate last year’s International Year of Plant Health. Nominations were collected through SC ITQ, SIG FC, SIG V&O and its R&D advisory group.

Dr. Reddy, who was nominated by multiple members, scored the highest among besting five other nominees, all accomplished researchers, including from Thailand, India, and the Philippines.

Published in some 160 journals, and presented research papers at 21 international conferences, he has a strong reputation in plant virology circles, both in India and internationally, specifically for his contributions in monitoring and studying emerging plant pathogens, including CaCV, CABYV, CMV, PMMV, TSV, ToMMV, TSWV, WBNV and Chrysanthemum white rust, and currently, ToBFRV.

Furthermore, he was recognized for the development of diagnostics and diagnostic services, extending to ELISA, DIBA and TIPA immunodiagnostics, NASH, PCR, RT-PCR, LAMP, NGS based molecular diagnostics for detection and identification of viroids, viruses, bacteria and phytoplasma infecting horticultural crops of fruits, vegetable and ornamental crops.

He has mentored 21 postgraduate students and trained 67 scientists/researchers on molecular diagnosis and identification of plant pathogens from seed companies and scientists from universities as capacity building.

In the domain of international trade and quarantine, Dr Reddy is a designated authority to issue phytosanitary certificates for tissue culture plants and seeds to facilitate the export of 21 ornamental crops, four fruit crops and 31 vegetable crop seeds.

Dr. Manuel L Logrono from Syngenta Asia Pacific Pte Ltd (The Philippines) is recognized as the 2021 most influential plant breeding researcher for field crops (private sector) in the Asia-Pacific
Overseen by APSA’s SIG Field Crops, this accolade is the first such program in the Asia-Pacific region to recognize the critical work and contribution of breeders and researchers to ensure farmers have the highest quality crop seed, as well as in inspiring the next generation of breeders and researchers.
Dr. Logroño started his career as a plant breeder and researcher at the Institute of Plant Breeding (IPB), UP at Los Baños and at the University of Hawaii at Manoa. At IPB, he led the breeding team that developed the first yellow field corn hybrids launched by a public research institution that were eventually planted in more than 100,000 hectares and supported by the Department of Agriculture in 1990s. It resulted in effective public-private partnership when he engaged the support of several private national/multinational seed companies to successfully produce and deliver IPB hybrids to target farmer beneficiaries. In addition, he spearheaded the development of sweet, sweet-waxy and high–lysine sweet corn cultivars that significantly improved the eating and nutritional qualities of green corn. His achievements in plant breeding and genetics were widely recognized with a number of national awards such as the Outstanding UPLB Researcher Award, Outstanding UPLB Alumnus Award, Outstanding Sillimanian Award, Plaque of Recognition as Plant Breeder by the Philippine Seeds Industry Association, Outstanding Young Scientist Award by the National Academy of Science and Technology and the Pro Patria Presidential Award for Outstanding Agricultural Scientist given by Philippine President Fidel V. Ramos.
His major accomplishments during his 25-years working in the private seed industry were largely achieved by leading the product development programs of highly regarded multinational seed companies (Cargill, Monsanto & Syngenta) that developed outstanding corn and rice hybrids. Dr. Logroño was a key player in the introduction and eventual commercialization of genetically modified corn hybrids in the Philippines. As the research director for Monsanto , he led the successful GM-corn (Bt corn) field evaluation in 1999-2000 which was the first in the Philippines and in Asia.  He worked closely with the science community, regulatory agencies and other government and non-government organizations in successfully shepherding the Bt corn field trial which eventually led to its biosafety and cultivation approvals. He also led Monsanto’s GM Traits Integration program in APAC when he supervised the GM conversion nurseries in Hawaii.
Dr. Logroño has been instrumental in the expansion of Syngenta’s seeds R&D capabilities in Asia-Pacific, North America and China. For Syngenta APAC, his work in field crops product development helped to increase corn seeds market share from less than 5% 10-15 years ago to more than 24% at present. For Syngenta North America, he was a member of the core group that integrated various companies acquired by Syngenta.  He eventually led the Eastern corn product development programs in Illinois, Indiana and Kentucky. For Syngenta Group China, he led the expansion of corn seeds development organization, including the establishment of Yangling Technology Center (a state-of-the-art center for new breeding technologies), breeding stations and the integration of companies acquired by Syngenta. He also led a global team of scientists across several countries in four regions responsible for corn and rice breeding. The high performing corn and rice products that were developed and launched under his leadership have been benefiting millions of farmers in Asia and Pacific, by increasing farm productivity, profitability and sustainability.  Dr Logroño was not only instrumental in the development of such products, but has helped to develop the “best-in-class” talent pool in the seed industry.
Though Dr. Logroño officially retired from Syngenta at the end of July 2021, he still continues his advocacies to support the small holder farmers in Asia-Pacific.

Dr. Conrado Balatero from East West Seed Inc (The Philippines) – South East Asia sub-region has been named the 2021 most influential plant breeding researcher for horticulture crops (private sector) in the Asia-Pacific
In addition to recognizing the work, role and contribution of horticulture crop breeders and researchers in developing quality seeds for varieties with high nutritional value for farmers, this accolade was also initiated in celebration of the International year of Fruit and Vegetables #IYFV2021..
Out of 10 scientists nominated in this category Dr. Conrado scored the highest. He especially stood out in criteria for the commercial impact of his R&D of a number of crop, including onion, bitter gourd, tomato, pumpkin, melon, wax gourd, papaya and okra, which continue to be popular amongst growers in the Philippines, Thailand, India, Indonesia, Veitnam, Myannmar, Bangladesh and Cambodia.
His work in both the public and private sectors have been of great benefit to small holder farmers. During his 16 years at the Philippines Institute of Plant Breeding, he pioneered on the use of molecular markers for Bacterial Wilt resistance in tomato as well as for the development of heat-tolerant potato lilnes for the lowland tropics.
Since 2003, when he joined East-West Seed, initially as R&D Manager in the Philippines, through to the present as EWS Group Breeding Manager, Dr. Conrado Balatero has led the way to the development of hundreds of new varieties from 28 crop species in key markets in APAC region.
He has steered the breeding teams of EWS in establishing a steady flow of innovative and superior varieties with enhanced yield, plant vigor, fruit quality, shelf-life, disease resistance and nutritional value. These varieties have been serving millions of farmers in the APAC region and have been instrumental in the improvement of their lives, their families, and the larger communities. Notable among the varieties are in the EWS Annual Report 2020 such as Onion Super Pinoy, Tomato Diamante Max, Bitter gourd Palee and Mestisa.
Seventy six out of the hundreds of varieties he worked on that were commercialized have been validated for intermediate disease resistance.
Thanks to Dr. Conrado Balatero’s extensive and deep knowledge and expertise in plant breeding, plant pathology and cell biology, among others, special unique traits have been discovered in papaya, which have led to three patents — in the US, Japan and Australia. 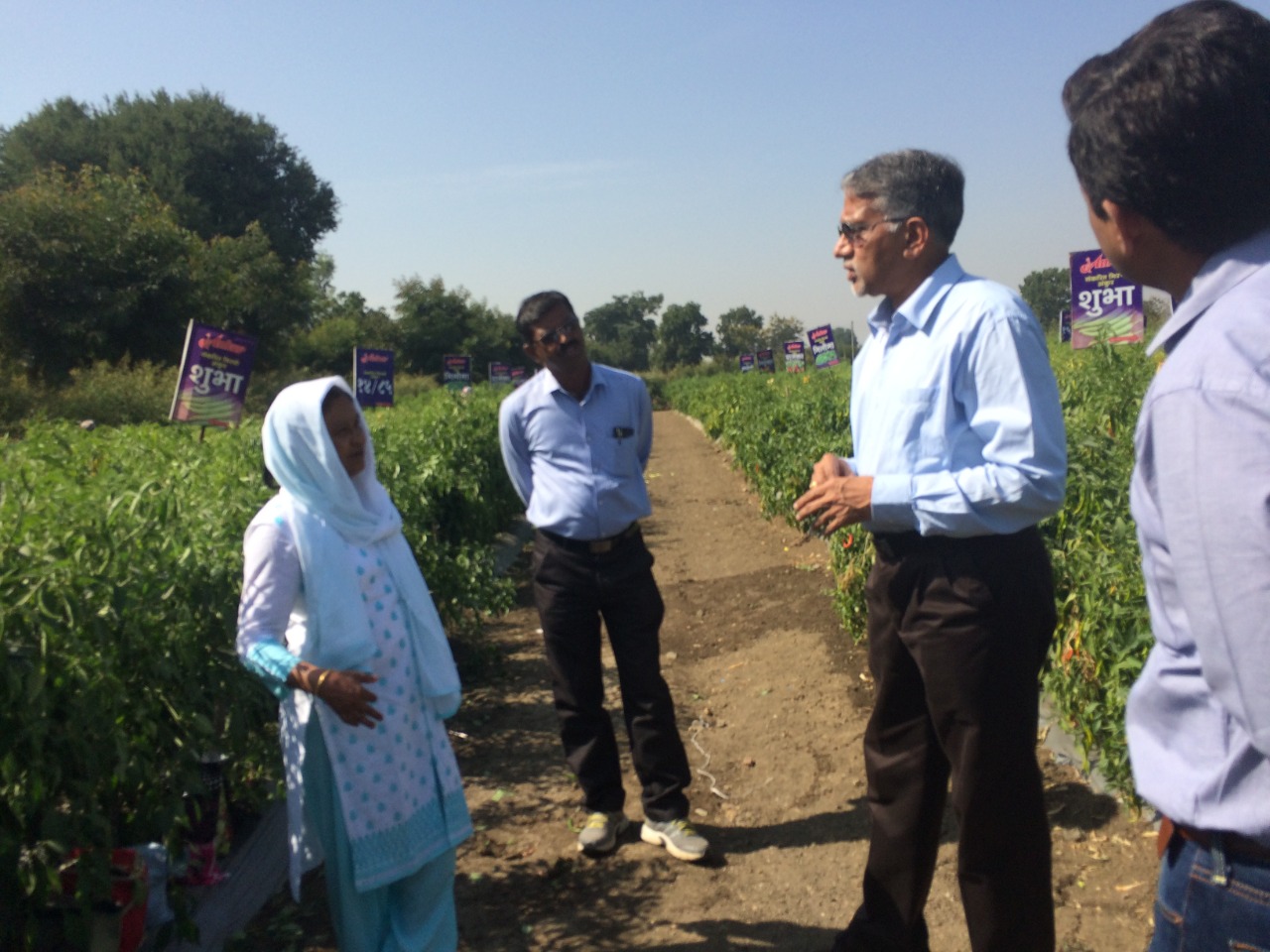 Dr. Sharan Angadi from Ankur Seed & ATPBR Foundation (India) – North Asia sub-region is recognized as 2021 most influential plant breeding researcher for horticulture crops (private sector) in the Asia-Pacific
Dr Angadi garnered the second highest score out of 10 nominees and the highest among the nominees from the North Asia region. Notably, he achieved the highest marks in certain criteria categories, namely, in Mentoring, which focuses on contributions to train and develop the next generation of breeders.
Having worked in vegetable seeds R&D for nearly three decades, Dr. Angadi has made tremendous contributions in the APAC region, and his key impacts can be categorized into three main facets.
1. Laying the foundation of R&D in Nunhems India: Working as R&D Head and Head of Breeding Asia Pacific in Nunhems, Dr. Angadi was key to setting up Nunhems India’s breeding stations & research facilities, hiring breeders and scientists and developing a strong R&D team, guiding them in the successful development of several successful vegetable hybrids, in tomato; hot pepper, okra; watermelon, bitter gourd, bottle gourd, cucumber, melon and eggplant. As Head of Breeding for Asia Pacific he developed and monitored the implementation of breeding strategies for major vegetable crops for India and Asia Pacific region covering Thailand, Vietnam, Indonesia, South Korea, and China. This strong R&D base developed by Dr. Sharan Angadi has brought Nunhems to prominence in the seed industry in the APAC region and placed Nunhems among the top three vegetable seed companies in India.
2. Continuing impact of the breeders and scientists mentored by Dr. Angadi: Breeders and scientists who were mentored by Dr. Sharan Angadi since 1994 are now working as R&D Head, Breeding Head, Director Research, Vegetable Breeding Lead, Crop Breeding Manager, Breeders and Scientists in more than 12 companies in India which includes both national and multinational seed companies like Nunhems, Noble Seeds, Mahyco. Acsen HyVeg. Enza Zaden, Bayer, East-West, UPL Advanta, Ajeet Seeds, Ankur Seeds, Nongwoo Seed, Sakata Seeds, Vachan Seeds, ORBI & Bhalsar Seeds. They continue to work towards shaping the vegetable seeds R&D and changing the lives of vegetable farmers through delivery of innovative value-added hybrids in the APAC region.
3. Developing the next generation of plant breeders: Now retired from Nunhems, Dr. Angadi, is working as a Director in the Foundation for Advanced Training in Plant Breeding (ATPBR) and actively engaged in developing a strong Plant Breeding Academy in the country working with other stalwarts from the seed industry, continuing to train and develop the next generation of plant breeders in the country. Apart from this, he is also working as an R&D adviser for few seeds R&D and seeds service provider companies.

Full interviews with all awardees will be published on APSA’s website throughout the month of December, and again featured in Q1 issue of Volume 28 in 2022, as will details about the final awardee, Dr. Hanson, leading up to the ASRT.