Seed trade in the Asia-Pacific region has been strongly affected by the COVID-19 pandemic. A series of surveys among seed company executives conducted in April, May and August 2020 shows adverse effects on the demand for sowing seed, although the situation in August was much better than in April or May for most crops. Still, adverse effects remain on seed company operations and particularly on the international shipment of seeds, which is hampered by difficulties in accessing freight and courier services, delays in inspections and testing, and difficulties in acquiring the necessary permits and certificates. 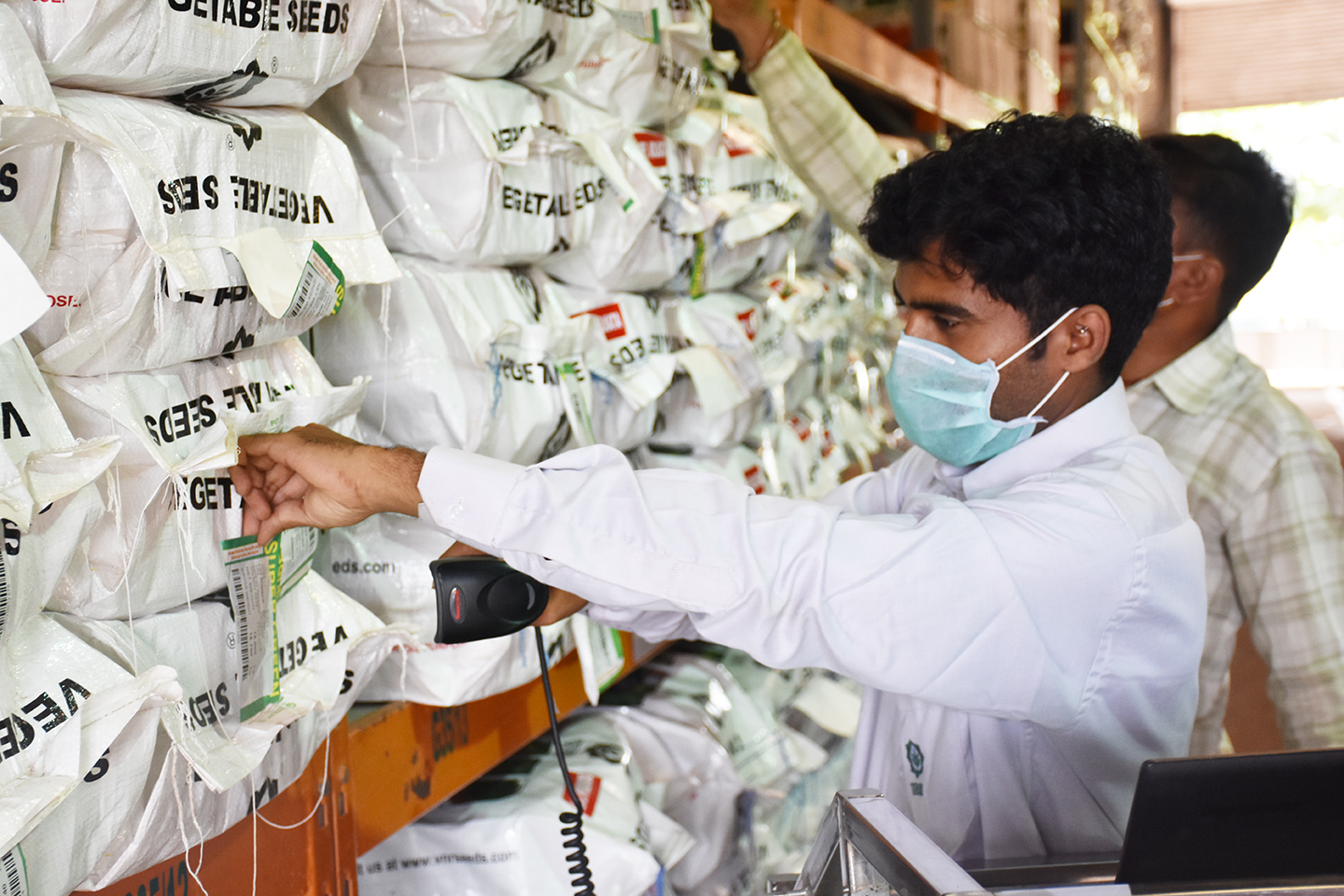 An employee at a vegetable seed production plant outside of Raipur, India scans a seed lot tag. Traceability through digital platforms has become increasingly important for the survival of the Asian seed industry during the Covid-19 pandemic. Photo: Steven Layne/APSA

When the World Health Organization declared the COVID-19 outbreak a pandemic on 11 March 2020, few expected that containment measures would cause long-term havoc. Strict lockdowns in the early phase of pandemic had a strong effect on food and agriculture, but measures were subsequently relaxed in many countries and the broader effects from the economic downturn became more prominent. Still, as the final quarter of 2020 nears, international traffic in the Asia and Pacific region remains severely restricted and this particularly affects the transport of sowing seed, which relies on an efficient system of production, inspection, and delivery to distributors and ultimately the farmers, whose sowing period is limited to specific windows dictated by seasons and resource availability. Disruptions to this system can potentially have severe consequences to food and nutrition security. Therefore, the objective of this survey was to gauge the effects of COVID-19 on the seed sector in the Asia-Pacific region, monitor for changes and trends so as to anticipate outstanding challenges, and thus devise coping strategies moving forward.

APSA and World Vegetable Center conducted an online survey of seed companies that are members of APSA and with operations in the region. Surveys were conducted in April, May and August 2020. Results for the earlier surveys were reported here and here. The third round collected responses from 73 seed company executives, 59 of whom represent seed companies with main operations in the Asia-Pacific region and 14 are from outside the region. Of the respondents, 64% represented companies with less than 100 employees.

Each survey round asked respondents to assess the impact of COVID-19 on the demand for various types of seed, the impact on business operations (e.g. shipments, inputs, labor, finance), and international trade (e.g. permits, custom procedures, freight). Some questions were added in the second and third rounds to better understand specific aspects.The third round added questions about small vegetable seed packs and about short- and long-term effects and measures taken.

We present the results by comparing the sample average for each survey round. The comparison focuses on companies with main operations in the Asia-Pacific region because the survey in April only included such companies. The results for companies with main operations outside the region are presented in a separate section. Some of the differences between rounds may be due to differences in the sample as not all companies participated in every round. 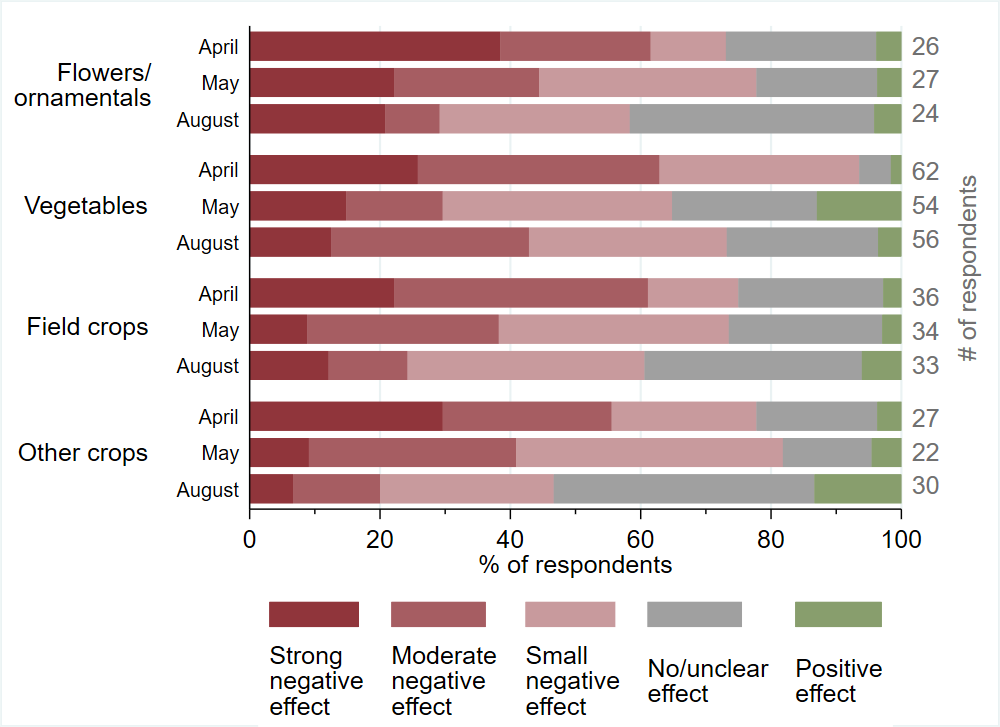 Figure 1. Effect of COVID-19 on the demand/sales of sowing seed for major crop categories during April, May and August 2020 as reported by APSA members in the Asia-Pacific region

The initial lockdowns had a strong effect on the business operations of seed companies as reported in the April survey (Figure 2). The situation had improved in May with fewer companies reporting moderate-to-strong negative effects. However, there is little improvement to report between May and August. For instance, 91% of the respondents report difficulties in international seed shipments in August—the same as in May. Furthermore, 62% continue to report difficulties in domestic seed shipments, 64% in obtaining inputs to their seed factories, and 75% in obtaining labor for seed production and processing. 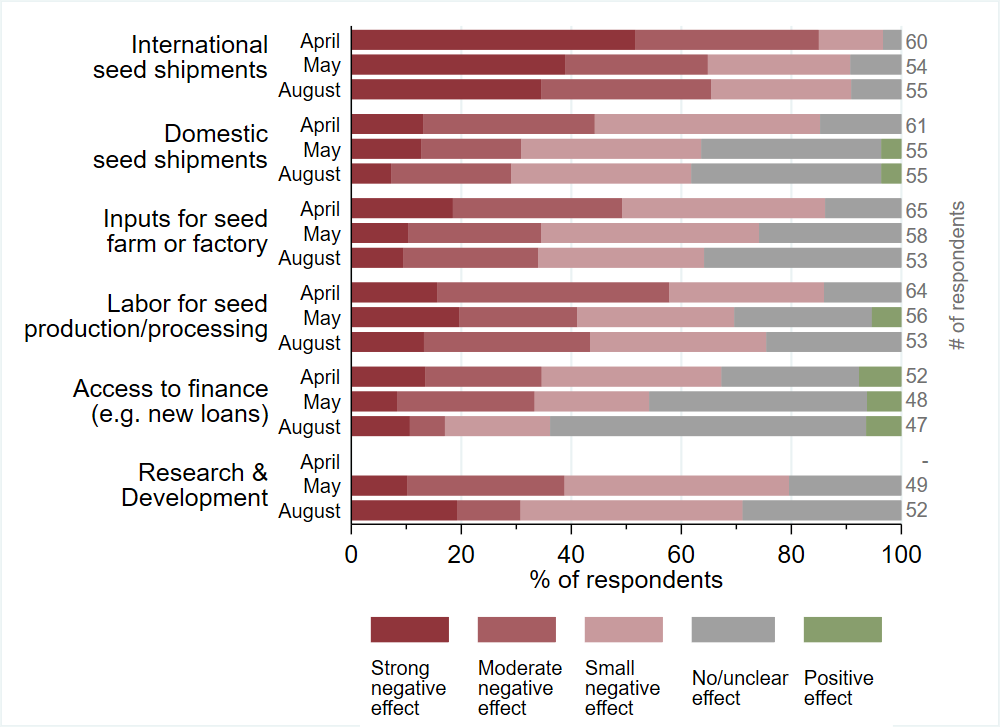 Figure 2. Effects of COVID-19 on seed company business operations during April, May and August 2020 as reported by APSA members in the Asia-Pacific region

No clear improvement in seed exports

International seed shipments are more strongly affected than domestic seed shipments as shown in Figure 2. In August, 36% of respondents from the Asia-Pacific region indicated reduced export orders and another 36% expected this to become a problem (Figure 3). Key constraints to seed exports are finding freight solutions (58% of respondents) as international air traffic remains very limited in the Asia-Pacific region, costs have increased and transport is unreliable. Courier services, needed to get the paperwork at the destination on time, also continue to be a key bottleneck as reported by 53% of respondents. Other important constraints reported by over a quarter of respondents include difficulties in the preparation of seed shipments (a problem reported by 29% of respondents), acquiring import permits (34%), getting customs clearance at the port of entry (39%), seed distribution in the destination country (31%), and other problems (27%). 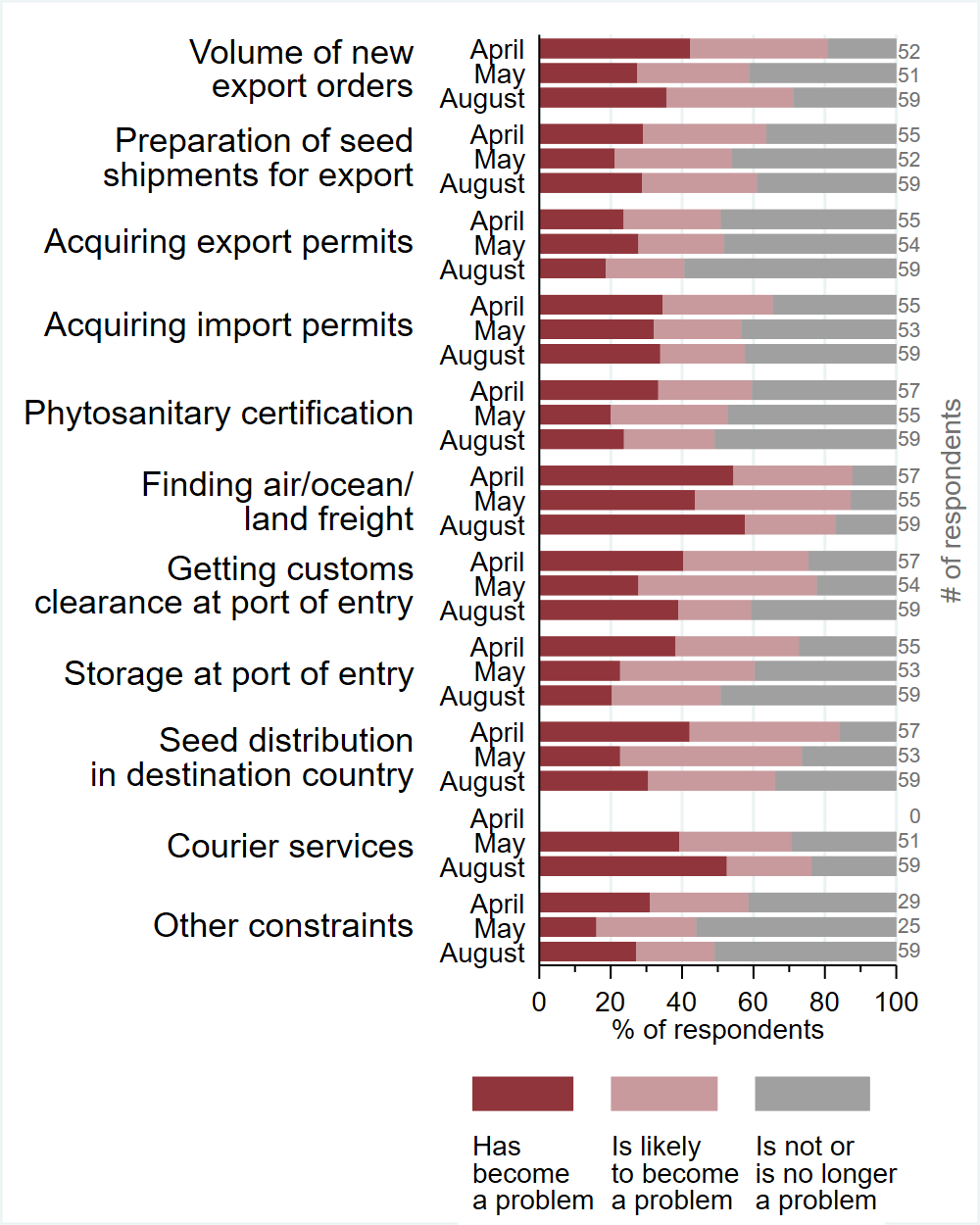 Figure 3. Effect of COVID-19 on the international seed trade during April, May and August 2020 as reported by APSA members in the Asia-Pacific region

Companies with main operations outside the Asia-Pacific are affected less

Companies headquartered in the Asia-Pacifc region not only reported a stronger decline in seed demand, but also reported more problems in acquiring import and export permits, more problems finding freight solutions, more problems with seed storage at the port of entry, and more problems with the distribution of seed in the destination country (not shown). These problems may be related to the fact that most countries in the Asia-Pacific region imposed international travel bans (e.g. India, Japan, Thailand, Vietnam, Myanmar) whereas other regions of the world did not ban international travel to the same extent. Although cargo planes are exempted from such bans, seed of high value crops is usually shipped using the spare capacity of passenger planes.

Figure 4. Effect of COVID-19 on the demand/sales of sowing seed for major crop categories during August 2020 for APSA members with main operations inside the Asia-Pacific region (APR) and outside this region (“other”)

The need for mitigating action

The third round of the survey added several open-ended questions to allow respondents to provide more details about challenges as well as to suggest medium- and long-term coping strategies and solutions (see download link at end of article). Challenges expressed in the latest round generally echoed those noted in the first two rounds, further reiterating that both logistical and administrative delays continue to fuel concerns about increased costs, and delays in getting seed to market.

Based on a number of comments, it may be surmised that the quality of seed in circulation may also be compromised. For example, respondents indicated a lack of testing and field inspections during the production cycle, which “could cause purity and other seed quality problems” and ultimately “lead to higher production costs” and “reduction in seed production and sales capacity in the short term”. Such problems could lead to increased use of uncertified seed and affect yields and product quality.

Many respondents relayed that they are adjusting their operations to mitigate adverse effects, such as through scaling back operations, offering flexible work arrangements, as well as negotiating contracts and securing stockseed in advance. However, there is still widespread concern about how companies will cope in the longer term should the crisis persist in 2021 and beyond.

Several responses reinforce the general sentiment of a shrinking market and a slow recovery. One respondent’s expectations are frank in this regard: “[Our] market share will drop, R&D investment will decline continuously [while our] production base will be lost, and the industry [supply] chain will involuntarily discontinue, [and our] initial investment will be lost.” Another respondent forecast that delays in securing multiplication contracts for the 2021-2022 season would reduce the company’s turnover by 20-30%. Another comment underlines a Catch-22 scenario: “Even if the covid-19 outbreak disappears, we expect a decrease in sales due to the increase in costs. If covid-19 continues, there may be problems that may result in downsizing as the company.”

Other reports have drawn similar insights about the aforementioned challenges in the region. The Food and Agriculture Organization (FAO) in June published a report highlighting food supply chain trends in 11 countries in South and Southeast Asia (Bangladesh, China, India, Indonesia, Malaysia, Pakistan, Philippines, Singapore, Sri Lanka, Thailand and Viet Nam; full report here.). It highlights rising food prices in most of these countries, linked to supply chain disruptions, including disruptions in seed supplies. Several of the report's policy recommendations are directly applicable to the seed sector, and consistent with suggestions offered by respondents to our survey (and the COVID-19 webinar held in May). These include, among others, the need for governments to work more closely with the private sector to solve disruptions in food supply chains, while avoiding restrictions on international trade, and making food systems more resilient.

A Rapid Market Assessment of Myanmar’s Ayeyarwady Delta, conducted in April-May by the Livelihoods and Food Security Fund, Mercy Corps and Welthungerhilfe, detailed several  challenges to the supply of agricultural inputs and quality seed to smallholder farmers.The authors call for the government to support seed suppliers to ensure that seed supplies to farmers are not further reduced, and recommends better use of digital tools to link farmers to market actors.

Moving forward, public-private partnerships and cross-sector cooperation will be critical to shoring up agro-food and input supply chains, especially through more efficient platforms and standardized systems. This is emphasized in FAO’s new COVID-19 Response and Recovery Program, which calls for $1.2 billion in initial investment in several key priority areas. Among them are improving data for decision making; bolstering trade and food safety standards; boosting smallholder resilience for recovery, and triggering food systems transformation.

The importance of  harmonized standards and digital tools was also highlighted in APSA’s 6th Expert Consultation on Phytosanitary Collaboration in the Asia-Pacific, held on August 26. During this online meeting, there was overwhelming consensus and support among industry representatives and officers of National Plant Protection Organizations (NPPOs) for the need to implement electronic phytosanitary certification systems (ePhyto), utilize third-party lab-testing accreditation models, and adopt a Systems Approach with regard to ISPM 38 on the international movement of seed. (full summary from the meeting to be included in Asian Seed Magazine, Volume 26, Issue 3, out at the end of September).

Indeed, such initiatives have not only helped to ensure seed supply for many companies and countries during the pandemic, but promise to improve the lives and livelihoods of millions through more efficient international agro-input and seed-supply chains. Such chains need transparency and traceability while protecting  the health of workers involved in the chain. Moving forward, as it becomes apparent that the “new normal” is here to stay, the seed industry will survive, if not thrive, though there will be increasing emphasis on reducing costs by improving efficiencies through the use of digital tools..

APSA members can download the summary data and comments here (APSA member login required). If you are not an APSA member but a key industry stakeholder, you may request access to this data, by emailing us.

Results from all three rounds have also been shared with the OECD Seed Scheme for their work to support on policy development in the Asia-Pacific region. The result of the report will also be presented during a technical session at APSA's upcoming virtual Congress. Stay tuned for update.