Australia's cannabis legislation is necessarily complex, as the country comprises six states and ten territories. Each has its own legislative and regulatory bodies, so Australian cannabis legislation and enforcement vary by territory and state. Nonetheless, Australia looks to be the only country with currently active bills proposing to legalize recreational marijuana as Canada and Uruguay have done. 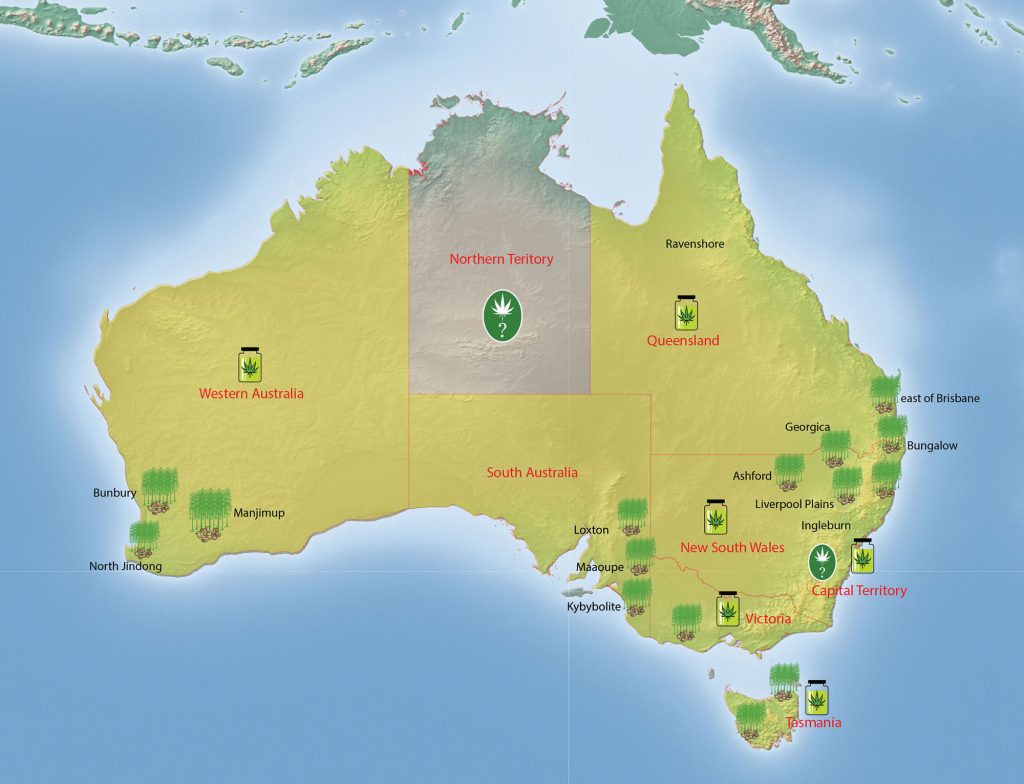 Unauthorized possession, cultivation, importation and consumption of cannabis or its derivatives remain illegal under the central government’s 1967 Narcotic Drugs Act. Recreational use also has been prohibited to varying degrees under state legislation: in Victoria since 1928; South Australia (1934); New South Wales (1935); Queensland (1937); Western Australia (1950); and Tasmania (1959).

Moreover, the Commonwealth has restricted since 1940 cultivation, import and marketing of non-psychoactive hemp and related preparations. Import restrictions specifically carry thresholds on CBD and THC content of the plant or derivatives, in raw and processed forms; cannabinoid thresholds on cultivated hemp vary from state to state, between 0.2% and 1% of dry weight.

According to the Hemp Association of Tasmania, there are 49 growers in that state, which produces nearly two-thirds of Australia's hemp crop.

In February 2016, the Australian parliament amended the Narcotic Drugs Act to effectively legalize growing of cannabis for medicinal and scientific purposes. Provisions enabling use of medicinal cannabis were formally codified in November that year. Based on that, Victoria became the first state to legalize medicinal cannabis in April, 2016, followed by New South Wales and Western Australia later that year, and in 2017 by Queensland and Tasmania. Prescription of cannabis medicine in these states for some conditions thus became legal.

At press time, South Australia and the Northern Territory had yet to enact medical marijuana legislation.

In February 2017, The Office of Drug Control (ODC) in the Federal Department of Health issued the first Cannabis Research licence, granted to Cannoperations Pty Ltd, a wholly owned subsidiary of the Australian company Cann Group Limited.

In April 2017, a joint Australia and New Zealand ministerial forum agreed to amend the country’s shared Food Standards Code to permit sale of low-THC seed as a food product. The amendment took effect in November, 2017, and since then the hemp industry has steadily increased acreage and its number of offerings.

Previously, seed-derived products intended as food supplements were required to carry a label marking them as unsafe for human consumption.

Now, cold-pressed hemp milk, hemp oil, seed, protein powder and other products are found in local supermarkets. Demand is reportedly growing gradually, with consumer reluctance tied to lingering uncertainty, but protein-rich hemp plants grow on farms around the state of Queensland and forecasts are upbeat.

Farmers believe they will profit from a multi-million dollar global market. In the next twelve months, they expect to see better assessment of customer purchasing behavior, data trends and information relevant to creating products appropriate to market demand.

Two bills are under consideration by the Commonwealth parliament to legalize and regulate cannabis for recreational markets.

In May 2018, Senator David Leyonhjelm introduced the Criminal Code and Other Legislation Amendment (Removing Commonwealth Restrictions on Cannabis) Bill 2018 to remove barriers to legalisation and regulation of cannabis for recreational, medicinal, industrial and other purposes. The bill has passed two readings, in May and October 2018.