Cannabis has been cultivated in Anatolia -- modern day Turkey -- for nearly 4,000 years. The country was a leading producer and exporter
until 1971, when the military overthrew President Süleyman Demirel’s government: the latter was unwilling to reduce cannabis production
despite pressure from the U.S.

In 1961, more than 14,000 hectares of cannabis were under cultivation, yielding some 5,000 tonnes. Ironically, to accommodate local demand presently, Turkey must import nearly the same amount at a cost of US$5.8 million: 4,521 tonnes were purchased abroad last year, while only seven tonnes were harvested locally from a plot totaling under five hectares. Yet cannabis is useful in production of some 3,000
modern-day products.

This year, after President Recep Tayyip Erdoğan raised the issue in January of mainstreaming hemp production, Agriculture and Forestry
Minister Bekir Pakdemirli announced that the government will expand cannabis production, currently allowed in 19 provinces on about 81
hectares (ha).

Use of industrial hemp is increasingly widespread, making it an attractive agricultural product to Turkish farmers as it can be used
for the automotive industry, paper manufacturing, textiles and pharmaceuticals, among others.

Chamber of Agriculture Engineers Istanbul Branch head Ahmet Atalık was reported by Turkish news outlet the Daily Sabah as noting that France produces 80,000 tonnes of hemp and China some 15,000 tonnes. He said, citing the British Hemp Association, that Europe as a whole had planted about 50,000 ha in 2018 to supply the car composites market, while Canada is estimated to cultivate around 125,000 ha, and now has the first industrial-scale bio-plastics facility. China, he said, had doubled its plantings during the period 2017 - 18.

Atalık said the history of cannabis cultivation in Anatolia dates to 1800-1500 B.C., and that the crop does especially well in the western
and central Black Sea regions.

Its status legally, however, has been a can of worms. Hashish was banned in Ottoman-controlled Egypt, the center of Arab use then, in
1879, again in 1890, and, after the Ottoman Empire dissolved following World War I, cannabis was formally criminalized in Turkey under the
Control of Narcotic Drugs Law of 1933 (Law No 2313).

That was amended in 1979 (Law No. 2236), wherein Article 3 reads: “Plantation of herbs used exclusively for extraction of cannabis and
extraction, import, export and sale of cannabis in any manner whatsoever are forbidden”, and Article 23: “Hemp planted without permit from the Ministry of Food, Agriculture and Animal Breeding for producing cannabis will be destroyed wherever discovered by the police forces under instructions of the highest ranking local administrator upon recommendation to that effect of the agronomy engineer of the Ministry of Food, Agriculture and Animal Breeding or, in the absence of such engineer, by the concerned agricultural extension service technician.”

Unauthorized use, production or trade of cannabis have been treated as drug offenses, with punishment prescribed in the Criminal Code of 2004 (amended 2011). Though the Code does not mention cannabis, it covers all “addictive, relieving or exciting drugs”, or “plants with relieving or exciting affect” as covered in Articles 188 to 192, with penalties ranging from one to two years prison for personal use, to a minimum ten-year imprisonment for unauthorized production, import or export.

In 2016, however, a sea change occurred in the government’s legal stance towards the plant. To curb illegal cultivation and revive domestic production new regulations were enacted to revive cannabis production for research and scientific purposes, including medical cannabis. The Ministry of Food, Agriculture and Livestock oversees implementation of the Hemp Cultivation and Control Regulations -- the first to comprehensively define the plant’s characteristics in terms of industrial hemp and low THC varieties (which are encouraged).

Growers receive one-year permits for a maximum of three years, with strict oversight and monthly auditing. The only medical cannabis treatments so far approved are oromucosal sprays containing CBD and THC.

Turkey does not currently produce cannabis products commercially, so treatments are imported -- but research is underway to change that. 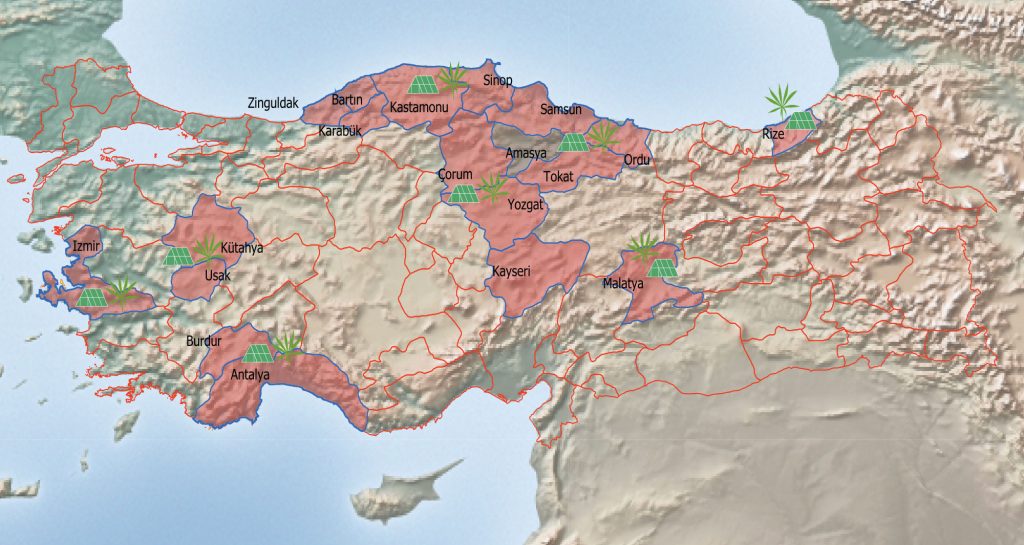 As noted above, production may be undertaken in 19 provinces. They are: Amasya, Antalya, Bartın, Burdur, Çorum, İzmir, Karabük, Kastamonu, Kayseri, Kütahya, Malatya, Ordu, Rize, Samsun, Sinop, Tokat, Uşak, Yozgat, and Zonguldak (and other areas with permission).

Here is the relevant law in Turkish.