UPDATE: November 2020: Cannabis seeds, other plant material no longer to be ‘narcotics’ Thailand’s Narcotics Control Committee resolved on November 24 nod to a law amendment that would exclude the leaves, branches, stems, trunks, bark, fibre and roots of cannabis and hemp from the government's narcotics list

Cannabis for medical purposes was formally legalized in Thailand in February this year when HM the King Maha Vajiralongkorn (Rama X) signed into law a bill to amend the Narcotics Act. Thailand hence became the first country in Southeast Asia to legalize medical marijuana. 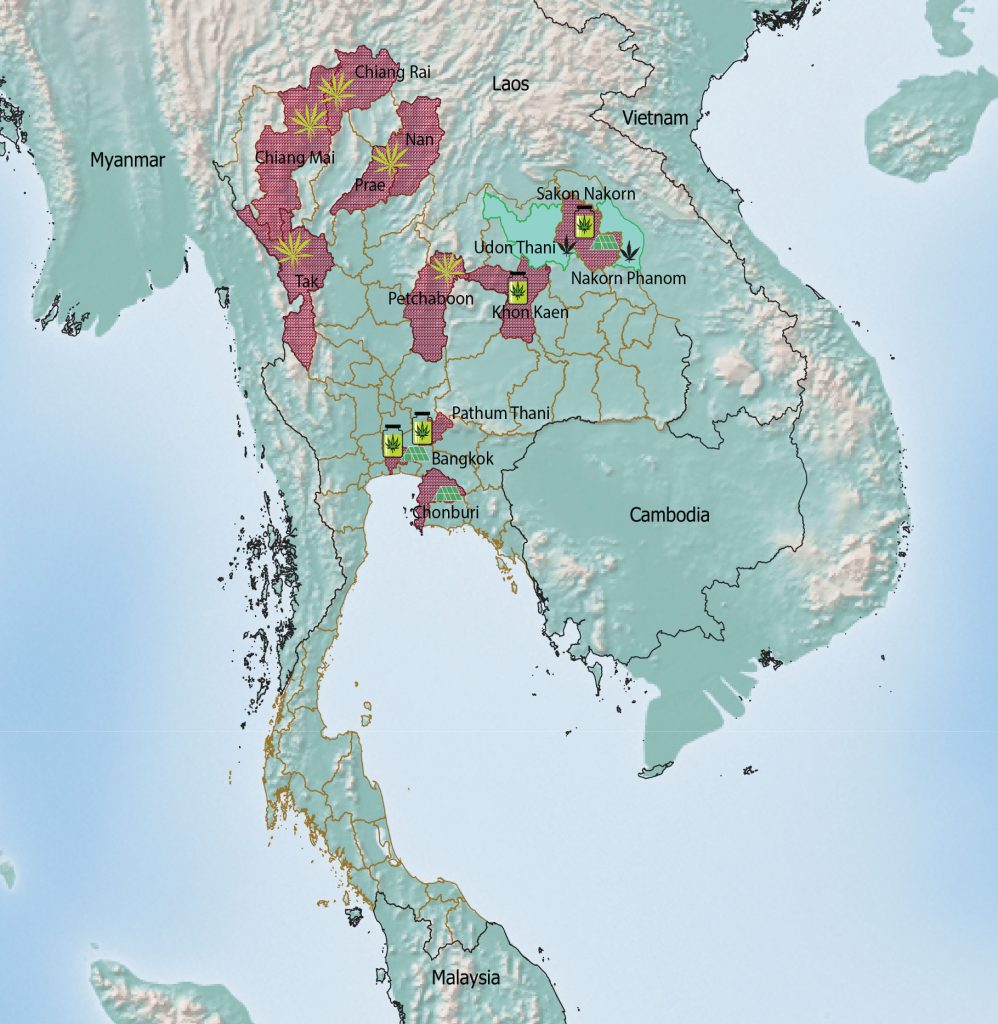 The bill, which had been approved by Thailand's military-appointed National Legislative Assembly in December 2018, was drafted by the FDA, the Public Health Ministry and the Narcotics Suppression Bureau . It allows for controlled research, cultivation, processing, possession and commercialization of medicinal cannabis in delimited forms.

The development coincided with Prime Minister Gen. Prayut Chan-ocha using his powers under the Constitution's Article 44 (which when invoked legalizes any government action) to put aside ten-year-old pending patent claims on cannabis derivatives by several foreign companies, which were filed with Thailand's Department of Intellectual Property .

Almost immediately thereafter, one of the nation's largest newspapers, Thairath, ran an editorial in which, after citing the list of officials on a committee studying the issue, explained that, "It is necessary to cite these names as they and their supporters must be held responsible for the damage occurring when this law goes into effect... Clearly, foreigners are the ones who stand to benefit from it and that is why it was enacted... What is worse, other drugs, such as the opiates, will escape restriction as a result."

If Thairath's opinion represents the conservative view in Thailand, that of the political party Bhumjaithai is the clearest expression of liberal thinking. One of the party's principal issues during the recent election campaign was to legalize cannabis under the so-called "California Model", declassifying the plant from the controlled substance list while giving Thai citizens the right to cultivate up to six plants per household.

It should be noted, however, that unlike respective models in California and several other US states that permit households to cultivate and possess cannabis specifically for personal use, the Bhumjaithai proposal is unique in that it appeals for ordinary citizens -- whether users or not -- to cultivate the plants for the purpose of generating income by selling their harvest exclusively to the government.

The party plastered Bangkok with banners proclaiming: "Plant and sell ganja for 70,000 baht per kilogram. Topple all restrictions for the people's mouths and bellies." The message was accompanied by cartoon figures of a farmer standing before stacks of gold coins on a background of marijuana leaves. Another poster announced that planting medical cannabis "will make Thais rich" and that legalizing it "reduces the power of the state."

It is notable that for all sides on the cannabis issue the financial aspect is foremost, as the government, too, in its considerations, focuses on the profit potential in industry, medicine and as an export.

That is not surprising in view of estimated recreational cannabis use among Thais: the 2011 UN World Drug Report, citing statistics from 2007, ranked Thailand 135th in terms of frequency among 165 countries with marijuana usage statistics (tied, curiously, with Mexico). The survey reported that cannabis use at least once during the previous year among Thais aged 12 - 65 was about 1.2 percent. That compares with 16.2 percent in the US; 29.5 percent in Papua New Guinea; 27 percent in Israel; 18 percent in Iceland; and 32.7 percent in Canada (the world no. 1). By comparison with bordering nations: Cambodia was listed at 3.5 percent; Myanmar at 0.9; Laos at 0.9; Vietnam at 0.3; and Malaysia at 1.6. Singapore, at 0.0004 percent, had the world's lowest usage rate.

Though Thailand long has been celebrated in the popular mind with cannabis (especially in the form of 'Thai stick'), cultivation, possession, sale, and use were prohibited under the Kingdom’s Cannabis Act, B.E. 2477 (1935), the Narcotics Act of 2522 (1979) and the Psychotropic Substances Act B.E. 2518 (1975).

Since 2005, however, gradual progressive liberalization has occurred. Then began cultivation, research and breeding of industrial hemp. Northern hill tribe farmers planted it under the auspices of Royal Project Patronage through the Highland Research and Development Institute (HRDI) at Pang Da Royal Agricultural Station in Samerng district of Chiang Mai Province. HDMI, in collaboration with Mae Jo University, cultivated hemp containing less than 0.3% THC dry weight in accord with European standards.

That resulted in successful breeding of four low-THC varieties registered with the Thai PVP office.

Even though these strains were bred for the purpose of cultivating industrial fiber, they are among the main parent lines being used in oil-grade cannabis breeding trials being carried out through a public-private-partnership between Maejo University and the Thai Cannabis Corporation.  (details here)

In January 2017, the Public Health Ministry issued the Ministerial Regulation Re: Licensing and Approval for the Production, Distribution or Possession of Narcotics Category V Hemp -- the first Thai legislation differentiating hemp and marijuana. It enables issuance of permits, since January 2018, for cultivation of industrial hemp containing no more than 1% THC dry weight. Locales where such permits may be issued, however, were limited to those designated by government agencies.

R&D momentum is growing rapidly. Several Thai academic institutions have announced plans or projects to pursue and/or expand on industrial hemp and medical cannabis research with commercial objectives. In addition to breeding and production trials being conducted by Maejo University as mentioned previously, other institutions that have jumped on the Thai cannabis bandwagon include Rangsit University (RU), Chiang Mai University, Kasetsart University, Khon Kaen University, the Rajamangala University of Technology Isan and Naresuan University (NU).

Anticipating imminent legalization, Rangsit University got a head-start in the race after it obtained the country's first license to conduct medical cannabis research, which it used to develop a cannabis spray that it says can reduce pain in patients with cancer or multiple sclerosis. When the university revealed its pilot product in April, 2018, which was developed from compounds extracted from low-grade illicit marijuana provided by the Narcotics Control Bureau,  human trials had yet to be conducted. At that time, the university announced it would conduct such trials after cultivating its own medical-grade cannabis when the law permitted it to do so.

Naresuan University -- which has a biotechnology and agriculture PPP track record with a leading multinational corporation --  affirms high-quality cannabis-derived medicines will be available in about five years as a result of the institution's research, which combines resources from several different faculties with an eye to developing medicines from marijuana and hemp. All are approved by the Government Pharmaceutical Organisation. At present, NU receives bricks of marijuana from the Royal Thai Police Narcotics Suppression Bureau because the university is presently enjoined from growing its own. Though this is likely to change.

Researchers are focused on developing pain-killing extracts for sublingual use and treatments for abnormal skin conditions. They expect to develop also a hemp-based gauze to both bind and heal wounds.

With regard to trade, those obtaining a license can produce, possess, import, and export cannabis for medical purposes, subject to the following conditions: each import or export of cannabis transacted must be accompanied by a license. It is also legal if for purposes of providing medicinal benefit in treating illness; for education, research, or developing agriculture, commerce, science, and industry.

Moreover, no more than is required for treatment of specific diseases is allowed, accompanied by prescription or certificate from authorized persons: e.g., dentists, physicians, or professional practitioners of Thai traditional medicine.

And since the current legislation specifically requires private entities to collaborate with state enterprises, and for any such venture to have clearly defined research objectives, we expect more Thai universities and ressearch institutions to enter the fray in the coming months and years.

Will Thailand in the foreseeable future legalize the plant for recreational purposes? The rhetoric is largely against it. On the other hand, some 20,000 are expected to join the 'Pan Ram' festival in Buriram Province -- with music, art, educational workshops, and vendors all dedicated to full legalization of cannabis in Thailand.

Newin Chidchob, founder of the Bhumjaithai party, is sponsoring the event with other prominent Thai cannabis activists April 19-21 at the Chang International Circuit, a Formula 1 track in Buriram. Also of important note are results of an opinion survey taken 1 - 11 March. In a poll of 1,116 working citizens by the Super Poll organization, affiliated with Thamasat University, 58.5 percent of male and 43 percent of female respondents agreed with Bhumjaithai's pro-cannabis policies. 51.8 percent of farmers surveyed agreed, along with 61.5 percent of government workers and 71.4 percent of private sector employees.

It might be best to line-up a joint-venture partner before doing cannabis business in Thailand, however, as, among all survey respondents, 90.6 percent oppose foreign ownership of Thai cannabis patents.